After hearing about TWE’s expertise and a competitive bidding process, AEP hired Total Wrecking & Environmental to demolish and remove three separate electrostatic precipitators (ESPs), which were an integral part of the Clinch River Power Station’s coal-fired power process. These precipitators had a massive active natural gas line running through and around them that had to remain in place and operational for the duration of the project.

There were many factors that made this project a unique challenge that required Total Wrecking & Environmental to be as strategic and surgical as possible. This industrial demolition project could not be done ’ with controlled implosion, as the plant had to be in full operation and unencumbered for the duration of the project. The AEP employees had to be able to maneuver around crew members and conduct daily operations at all times, and the emphasis of keeping a tight footprint meant every move had to be predetermined and planned with the utmost precision.

Additionally, once the structures were reduced, the debris had to be transported on a one-way road traveling up a large hill out of the canyon that the power plant was set in – the plant was originally built in such a remote location as to be difficult to see in the event of an enemy plane flyover!

The top priority for this sensitive AEP operation was to make sure the demolition was conducted as safely as possible. When removing the three electrostatic precipitators, Total Wrecking developed three unique ways to dismantle each of them given their placement next to the boilers in the power plant.

The first ESP was located next to and on top of a main gas line and had to be struck down with human crew holding torches on 80′ excavators in order to maintain firm control of the landing zone of falling debris. Total Wrecking’s crew spent hours each day on an 80’ high platform physically dismantling the precipitator. This was the most dangerous and resource-intensive process, but the exacting nature of the situation left no other choice.

The second precipitator was more accessible by crane, which gave more leeway than the first. For this, Total Wrecking employed a 110’ crane with a proprietary ‘guillotine’ attachment which was able to reach and surgically remove pieces to then fall to ground level. This part of the demolition project didn’t require quite as many active personnel and was the safest and most cost-effective phase of the project.

The final precipitator stood tall and further away from the other precipitators. Total Wrecking was able to reduce the risk of human injury and excessive costs by effectively tipping the precipitator over to fall on the ground. The controlled fashion in which the debris was able to fall allowed for optimal safety as well.

Once the structures came down, there was still substantial work to be done removing the debris, separating the salvageable materials from other wastes, and a small amount of asbestos removal that was discovered later on that was not originally part of the project scope. Contaminated polychlorinated biphenyls, or ‘PCB’, ash was discovered as well and needed to be removed from the site.

The single lane road leading out of the plant grounds had to be shared with plant personnel, and long waits for trucks removing debris from the site extended project duration. The total duration of the job at the AEP Clinch River power plant was roughly a year and a half, including closeout and demobilization.

The $5.1 million job to remove coal-fired ESP’s and make room for a Natural Gas Combined Cycle Plant was a resounding success for both American Electric Power and Total Wrecking & Environmental.

Roughly 400,000 square feet of ground space was freed for further development after the ESP’s were removed and hundreds of thousands of dollars of scrap salvaged from the site helped offset costs for both companies via an 80/20 scrap share split arranged between AEP and TWE.

During the extended stay in the Cleveland, Virginia area the Total Wrecking crew contributed to the local economy by buying food, lodging, and other goods, giving a small lift to the rural town. Additionally, TWE hired local administration and labor workers to assist with the project.

Although it was a challenging year and a half for the out-of-town Total Wrecking & Environmental Crew, who had to adapt to living and working so far from home, the project in conjunction with the great people of AEP in Virginia was one of the more rewarding experiences for the entire company.

Total Wrecking worked diligently to complete the project within budget, with a minimum of change orders. I often sought their advise as issues were discovered throughout the demolition. An example of which is the discovery of PCB containing sealants on the exterior panels of the original building. Having experienced similar conditions on previous projects the Total Wrecking team was familiar with the federal regulations, abatement procedures, and disposal requirements. They made every effort to minimize the cost while meeting all of the governing regulations.

Director of facilities, Board of Education of Allegany County 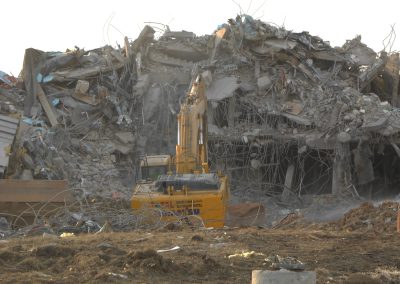 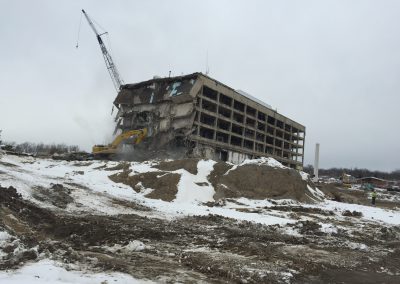 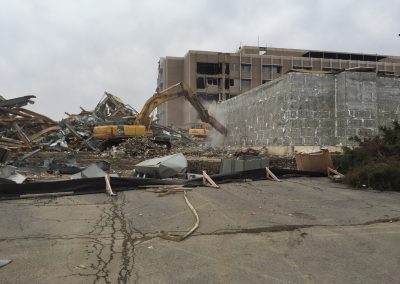 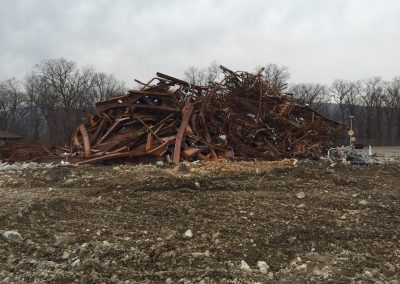 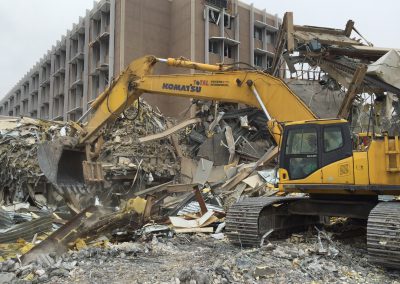 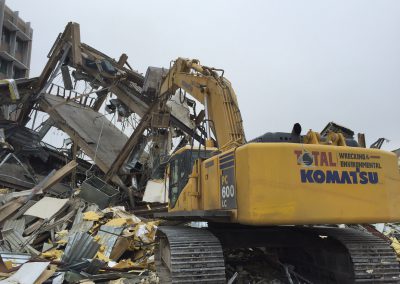 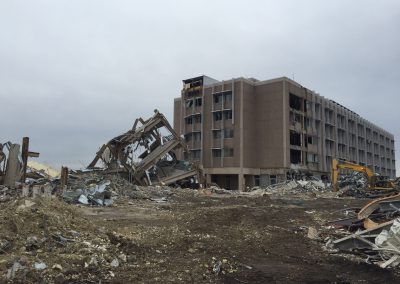