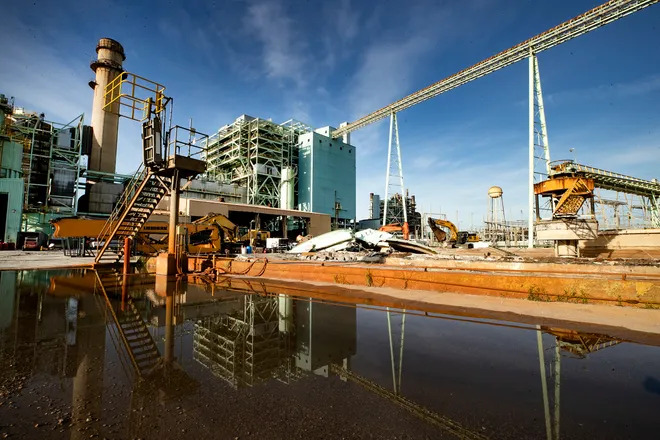 Total Wrecking & Environmental is no stranger to massive industrial demolition projects that span multiple years and require specialized crews of uniquely certified experts. As a matter of fact, it’s these types of projects that have become their forte. From the Jacksonville Electric Authority (JEA) Project demolition of 2 massive cooling towers that produced a whopping 1634 megawatts to 2015’s New York State Fairgrounds demolition that saw the demolition of the iconic grandstand along with 11 massive building structures, demolition projects of monumental scale and surgical expertise is the Total Wrecking brand.

The Lakeland McIntosh Power Plant in Florida, like all industrial demolition projects, has plenty of unique challenges, hazards, and complexities that require surgical precision from the industry’s most qualified and experienced professionals. As the project gets underway in Lakeland during the summer of 2022, the process that ultimately led to Total Wrecking being awarded the project is just as interesting – and important – as the work that lies ahead.

In the post below, experts on the ground leading the project inform everything from how they won the bid, the most pressing challenges as work commences, and the massive (and admittedly exciting) industrial demolition work that lies ahead during the 1.5 – 2 year project timeline.

Earning (Not “Winning”) The Bid

There’s a toxic commonality across the industrial demolition industry, as well as construction (both residential and commercial) as a whole: chasing the lowest bid for the sake of earning additional work. This practice almost always comes at the expense of either A) safety, B) time, or C) professionalism. Contractors, sadly, will cut corners – even at the risk of their own employees – if it means they can earn the lowest bid and ultimately the project itself.

Rather than “chase the bottom,” Total Wrecking & Environmental leadership worked hard to earn the trust of power plant leadership by offering an unparalleled level of transparency. They submitted an extensive safety record, for example, that provided verified historical data that showed their steadfast commitment to safety at the highest possible level. This collection of documents proved they had safely completed a long list of projects at a similar level, all without incident and well above baseline OSHA requirements.

They also provided a sprawling project history document, with immense detail about the wide breadth of industrial demolition projects completed since their inception in 2013. From asbestos abatement, environment remediation, asset recovery, recycling, dismantling, and everything in between, this document proved there was no demolition-related challenge that Total Wrecking hadn’t already safely completed.

Lastly, and after site walkthroughs and weeks of reading and digesting every piece of documentation about the McIntosh Power Plant site, Total Wrecking delivered a detailed strategy document, explaining exactly how they would tackle the project and in what order. This included thoughtful and well-studied information about projected timelines, sequence of tasks, and potential hazards along the way.

With these critical elements in-hand, leadership at McIntosh Power Plant knew that Total Wrecking and Environmental was the most qualified contractor for the immense job ahead.

Like every industrial demolition project, this one began with a multi-week mobilization of crew and equipment to the jobsite. The equipment mobilization itself requires careful planning, as many of these pieces are so immense that routes with sufficient width and elevation need to be predetermined to avoid road-related delays.

Similarly, because crews will live locally over the course of the project, comfortable and nearby housing needs to be found and secured in order for the hundreds of on-site workers to be settled throughout their years of work completing the demolition.

When work commenced in May 2022, the first weeks of the project were dedicated to asset recovery in order to identify any valuables that could be sold for profit. This included metals, pieces of equipment, reusable parts, and so forth that could be scrapped for cash or sold to other third-party buyers.

In fact, this was a predetermined element of the project that helped earn Total Wrecking the project in the first place: identifying, salvaging, and ultimately selling scrap parts at a shared profit. The 80/20 asset recovery split on this project would net McIntosh Power Plant up to $1.2 million, a tremendous savings that was agreed upon before Total Wrecking even broke ground.

Total Wrecking leaves no stone unturned when it comes to reusing and recycling every piece of material possible. In early weeks, they’ve even gone so far as to strip protective copper coating from one of the unit’s wirings, a process that not only underlines their commitment to environmental sustainability but also provides an early revenue stream to the client.

The Industrial Demolition Ahead

All of Total Wrecking’s efforts over the next 1.5 – 2 years are centered around the safe and comprehensive abatement, remediation, decommissioning, and demolition of 3 massive coal-fired units that have been in operation at the McIntosh Power Plant for more than 40 years.

Unit 1, the smallest but last undertaking of Total Wrecking’s full-project timeline, is a 90-megawatt generator that used to burn oil until it was converted into a natural gas generator later in its lifecycle. This is in fact the smallest of the 3 units that Total Wrecking is dismantling over the course of the project.

Unit 2 is noticeably larger, both in power generation and overall footprint within the jobsite. It consists of 4 short stacks that form a relatively neat, compact rectangular shape. This unit is a dual-fuel generator that clicks in an impressive 114.7 megawatts steam turbine that is powered by oil or natural gas. As powerful and efficient as it may have been in its heyday, a dangerous explosion back in May of 2017 led to its full decommissioning. Now, it’s Total Wrecking’s responsibility to see that it’s safely dismantled and disposed of to make way for the next generation of power creation.

Unit 3 is the real prized pony of the entire project. Considered by both Total Wrecking contractors and McIntosh Power Plant leadership to be the “mothership” of the power station, this 360-megawatt coal-fired behemoth dwarfs the output and footprint of the other two units.

Unit 3 consists of 13 separate short stacks that consume more space than an entire football field, as well as a smaller two-stack building that towers over many of the other units throughout the site. Altogether it’s a sprawling, gargantuan structure that can be seen all the way from the far shores of the neighboring Lake Parker. This massive unit operated for over 40 years, helping supply power to hundreds of thousands of residents within Lakeland Florida, before its decommissioning this spring in April 2022.

Working on an Active Power Plant

The crucial element to keep in mind is that Total Wrecking is dismantling just one portion – albeit a sizable and significant portion – of an otherwise very active power plant. The utmost sensitivity and care needs to be maintained throughout the entirety of the project to ensure their work does nothing to interfere with the rest of the active power plant.

For example, a switch yard adjacent to the massive Unit 3 will remain operational after Total Wrecking’s services are complete. Given it’s less than a stone’s throw away from the football-field-sized unit that will be demolished, Total Wrecking is using some creative thinking and impressive demolition strategy to employ a large double pipeline as a barrier.

In its past life, this pipeline played a pivotal role in carrying water to the cooling towers, but will now maintain the switch yard’s safety while Unit 3’s demolition is carried out. Once Unit 3 is in fact demolished, Total Wrecking will then proceed with dismantling the pipeline and restoring the surrounding site to its normal working state.

This project is unprecedented in its scope and complexity, requiring a tremendous amount of resources, specialized crew members, and surgical planning to ensure the project is completed safely, on-time, and within the financial parameters agreed upon.

Total Wrecking has already completed a long list of monumental power plant demolition projects, as well as dozens more chemical plants, paper mills, manufacturing facilities, urban high-rises, and everything in between. Throughout their many years of business, they have proven that operating with safety, integrity, quality, and family at the forefront are the greatest distinguishing factors.