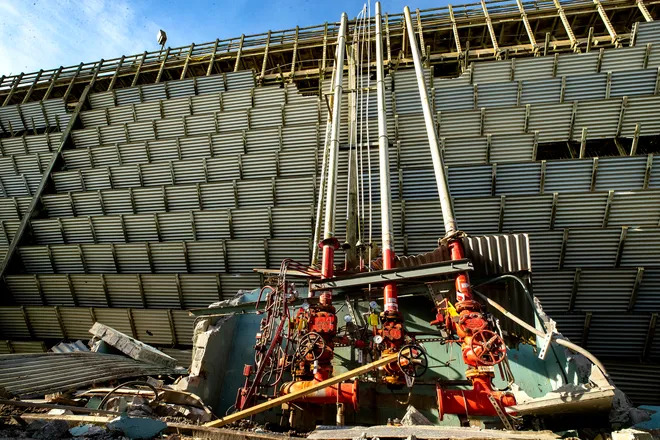 Total Wrecking & Environmental, one of the country’s leading industrial demolition contractors based in Buffalo New York, has commenced work on one of its most ambitious projects yet.

Total Wrecking successfully secured the job earlier this year not by submitting the lowest bid, but by earning the trust of power plant leadership by providing an unparalleled safety record, project history, and detailed demolition strategy during the rigorous contractor review process.

Earlier this month, Total Wrecking formally broke ground on the project after a successful mobilization of demolition equipment and crews who will now operate and live locally for the duration of the project. Over the next year and a half, Total Wrecking will complete the abatement, remediation, demolition, asset recovery, and removal of 3 massive coal-fired units that have been in operation for over 40 years.

Unit 1 used to be a 90-megawatt oil-burning machine until it was converted to natural gas. Unit 2 was a dual-fuel, 114.7 megawatt steam turbine powered by either oil or natural gas but was decommissioned after an explosion back in May of 2017.

Unit 3 is considered by power plant professionals to be the “mothership” of the station, a 360-megawatt coal powered behemoth that ran for nearly 40 years before being decommissioned this April 2022.

Total Wrecking spent the first few weeks of the project in asset recovery mode to identify any valuables – metals, reusable parts, etc. – that could be sold for a profit. Lakeland Power signed an agreement to receive up to $1.2 million for the right to sell any remaining assets resulting from the demolition.

In the interest of recycling every piece of reusable material possible, Total Wrecking is going so far as to strip the protective copper coating from Unit 3’s wiring. Not only does this underline their commitment to environmental sustainability, it also provides an early revenue stream for both them and Lakeland as part of the agreement.

The cooling towers for Units 2 and 3 will be among the first structures dismantled. Unit 2’s cooling tower is a small, rectangular structure with four stacks, while Unit 3’s consists of 13 short stacks that consume more space than a football field . . . in addition to a smaller two-stack building. These  colossal structures can be seen all the way from the far shores of neighboring Lake Parker.

This project is unprecedented in both scope and complexity, requiring a tremendous amount of resources, specialized crew members, and surgical planning to ensure the project is completed safely, on-time, and within the financial parameters agreed upon.

Total Wrecking also needs to preserve a switch yard adjacent to Unit 3 that will remain an active part of the plant post-demolition. They will use a large double pipeline once used to carry water to the cooling towers as a protective barrier and safely dismantle this only after the largest (and most hazardous) demolition phases  are completed.

Total Wrecking has already completed several monumental power plant demolition projects — and dozens more chemical plants, paper mills, manufacturing facilities, urban high-rises, and everything in between. Throughout their many years of business, Frank and team have proven that operating with safety, integrity, quality, and family at the forefront are the greatest distinguishing factors.